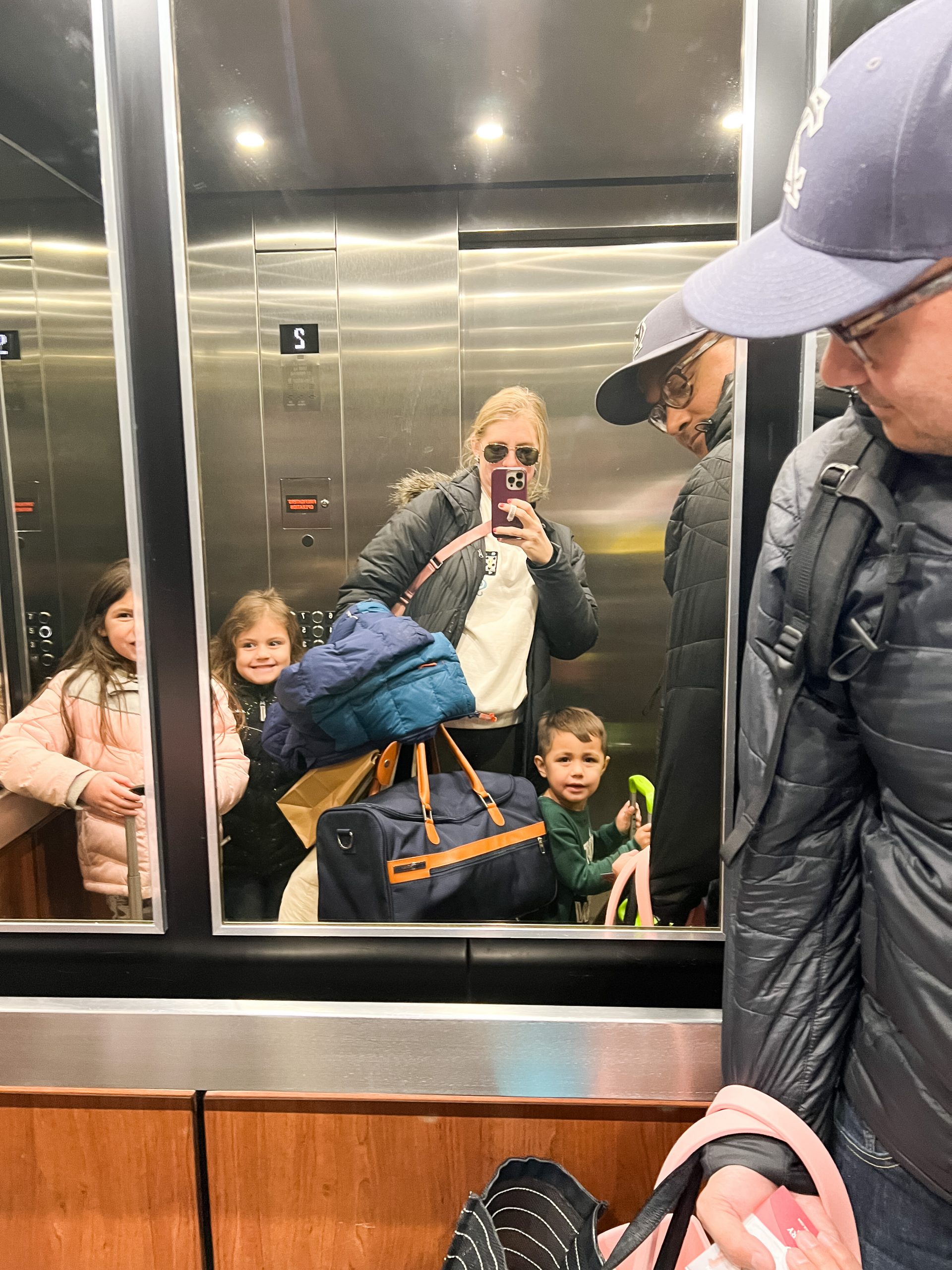 The idea for our holiday staycation came randomly but once we had decided, we were all in very quickly. We wanted to do something fun with the kids during the week between Christmas and New Years without actually traveling anywhere because, kids. We settled on St. Charles which is just a hop, skip and jump over the river for us on the Illinois side. St Charles, MO is known for its Main Street with cobblestones, shops and restaurants of all varieties. The rumor is that Main Street is extra magical for the holidays and they were RIGHT!

We stayed at the Drury Plaza Hotel St Louis St Charles nestled in ‘The Streets of St Charles’ district. This meant we were close to Main Street but also within walking distance from the hotel to TONS of yummy restaurants. We booked a suite which allowed the girls to have their own space and sleepover for the two nights we were there on the pullout couch and Chris, Cubby and I stayed in the bedroom. I hadn’t been in a hotel in YEARS and it was, honestly, so nostalgic for me. The hotel was clean, had GREAT happy hour perks (3 drinks per adult guest per night) and a variety of yummy snacks to choose from. Not to mention free popcorn and continental breakfast. We felt a smidge tricked when we discovered that the ‘indoor’ pool was both an indoor/outdoor pool separated only by a canvas curtain but the kids didn’t mind and we (they) swam every day we were there. My only complaint is that they didn’t offer room service which would have been *such* a fun experience with the kids. Next time…

Outside of the hotel, we did stroll down nearly ALL of Main Street St Charles. With the lights and garland along every window and doorway, it truly did feel like we were walking through a Christmas movie set. We popped in and out of every shop that looked interesting but our absolute favorites were The Sugar Bot Creamery (with their homemade ice cream made IN HOUSE), Main Street Books (a super charming two story bookstore with something for EVERYONE including a little section up front with employee and local recommendations), and The English Shop (a gift shop with tons of imported goodies from England, Scotland, Ireland and Wales). I am already dying to go back to The English Shop to snag one of their tea sets! Swoon.

From the hotel, we walked to Bar Louie and had a delightful and delicious dinner. We ordered drinks, apps AND dinner and it didn’t disappoint. They even had a cocktail creation called ‘Staycation’ which Chris happily enjoyed. The atmosphere was great and it was a perfect family friendly restaurant. Don’t skip the chips + dip appetizer…it was A M A Z I N G. If Bar Louie doesn’t strike your fancy, there’s also Sauce on the Side, First Watch, Firebirds Wood Fired Grill, P.F Chang’s, Prasino, Tucanos Brazilian Grill, Wasabi Sushi Bar, and Dewey’s Pizza all within walking distance of the hotel.

Trying new coffee shops is high on our list of favorite things to do so on the second day of our stay, we found ourselves at Upshot Coffee. Chris ordered an iced Golden Milk Latte and I treated myself to a Sweater Weather Latte. The girls each grabbed a cookie, Will ordered a donut (which they warmed up for him) and it was a cute little place to sip and chat. Coffees were scrumptious and since the building is an old repair garage, the vintage vibes were fun to soak in.

On the day of our departure, the girls and I walked to Picasso’s Coffee which was within walking distance from the hotel. I have to say I was disappointed in this coffeeshop and I hesitate to say *anything* negative about coffee shops… Our lattes were both bitter and too sweet at the same time, it took quite a long time for them to make two lattes and the aesthetic was a little too dark and moody for me. I’m even sad to admit that Chris and I didn’t even finish the lattes..and when have I ever been known to part with a single drop of ANY caffeine?!

Anywho, all in all our little staycation was a HUGE success! The kids loved swimming inside, exploring bits of St Charles and they especially loved the hotel room. It was the little vacation from our Christmas vacation that we absolutely needed. They’re already asking if we’re going to do it again next year and, at this time, I don’t see a single reason why we wouldn’t. I would suggest the Drury Plaza Hotel 100% (and ‘the streets of St Charles district’) and would LOVE to hear about your St Charles Staycation when you book one!